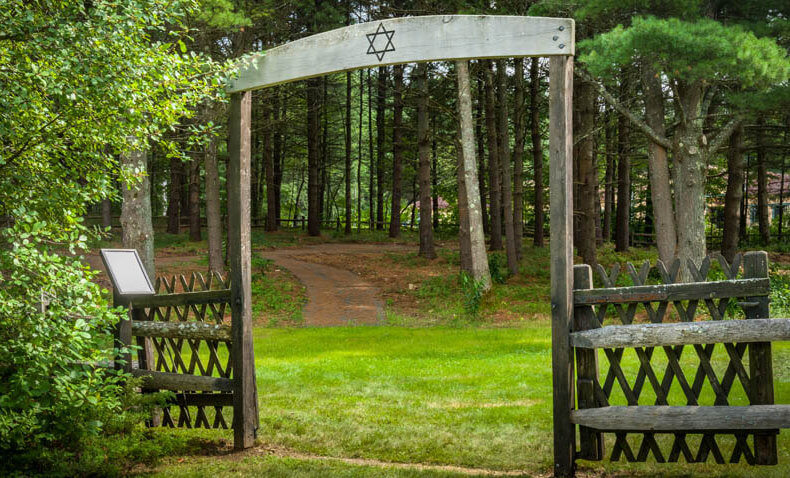 Jill Kaufman of WFCR interviews Walter Leopold on his installing the gates of his village Gangelt the Gute Ort in Germany to the entrance of the  Jewish Community of Amherst Cemetery in Shutesbury.

A journey in discovery, recovery, tradition and remembrance. Recorded by and retrieved from Public Radio International.

These simple wooden and iron gates were brought here from a Jewish cemetery in Gangelt, which is a Western German village near Aachen, near by the Dutch border. Even though Jews had settled between the Maas and Rhine rivers alongside the Romans, the first official record of a Jewish resident in the small rural-Catholic town of Gangelt, was a man named Marx (or Marcus), dating back to 1654. A small Jewish congregation that lived off limited trade, money lending, and livestock trading came together and, in 1824, consisted of ten families, most of them with many children. As early as 1823, this congregation had a “synagogue on Heinsberger Street behind Nathan Herzfeld’s house”, as is documented in the town chronicles. It wasn’t until 1877, though, that the Jew of Gangelt established their own cemetery at Wirtsberg, on the outskirts of Gangelt.

During WWI, three young Jewish men from Gangelt lost their lives as soldiers of the German Army. On January 18, 1925, the town chronicles announced that “our oldest resident, Hermann Alban, died at the age of 87. He was a poor Jew but was well respected by all, due to his sprightliness. Many, including non-Congregationalists, joined him in his last journey to Wirtsberg.” Just a few years later, Gangelt’s Jewish congregation was annihilated during the Holocaust. Approximately 50 Jews lived in Gangelt when the National Socialist party took power in 1933. More than half of them were murdered.

Aside from the synagogue – one of the few synagogue not burned down during the “Kristallnacht” of November 9/10, 1938 – and a table that was put up at the town hall in 1992, only the Jewish cemetery is left to remind us of the Jews of Gangelt. This cemetery is located far from the remains of the medieval town walls on a wooded hill, adjacent to a busy state highway. The “official permit’ for use of the cemetery that was issued by the Prussian government on December 27, 1877, specified, “that the site be completely and permanently enclosed and kept locked except during burials”. Only the two simple brick pillars of the entrance gate are left of this original enclosure.

The 31 remaining tombs bear the names of long-established Jewish families of Gangelt, such as Hertz, Josephs, Leopold, and Rosendahl. All the gravestones show signs of damage, and many graves – such as the one of the above-mentioned Hermann Alban – were obliterated entirely. We do not know whether the cemetery was first desecrated during the “Kristallnacht” when Gangelt experienced terrible anti-Semitic riots, or whether it had been desecrated even before then. After 1945, the cemetery was renovated and is now being cared for by the town of Gangelt. Yet, desecrations still happen today; the last one occurred in May of 2010.

On the initiative of Walter Leopold, the gates of Gangelt’s cemetery were installed here during a ceremony on October 24, 2010. His grandfather, Lion Leopold (1871-1949) was the last president of the synagogue and its Jewish community in Gangelt. His grandfather’s sister, Berta Morgenstern, née Leopold (born 1875), was the last person to be laid to eternal rest in the Jewish Cemetery of Gangelt on June 23, 1936.

Dr. Horst Seferens is Director of Press and Public Relations for the Brandenburg Memorials Foundation in Oranienburg (near Berlin).